Tiesto Would Love Tom Brady to Model His New Line of T-shirts – Interview from NYmag.com 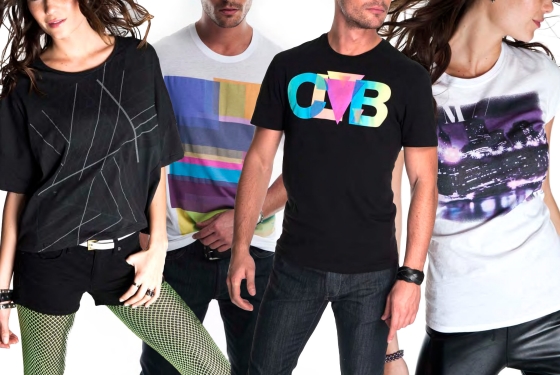 If celebrities like clothes, and if they know someone who can help them make clothes with their own personal vision, they will go forth into this great and challenging retail landscape and put out a line. This right, ye celebrities will agree, may as well be of the divine nature, God-given to those who are very gifted in other ways. D.J. Tiësto, whose chief gifts are musical, says that his Clvb Life clothing line, which launches today at Kitson Los Angeles and Atrium in New York and Miami, was inevitable, considering his love of fashion. Created with the help of his partners, who include Sean John’s Jeff Tweedy, Tiësto’s line consists only of T-shirts for now (men’s are $68, women’s are $56), but he plans to grow the business until he has enough for a runway show of his very own. These days, can the importance of slow growth really be overstated? We called Tiësto in his Montreal hotel room the other day to talk about the line, nightclub and rave style, and his dream T-shirt models.

So why are you doing this?
There’s three things I really like in my life: music, sports, and fashion. So when you’re always clubbing and you always go out, you see a lot of people wearing stuff and I just love it. And I love the magazines, to read about fashion. I like when people dress nice — and also, for guys, I like nice shirts and stuff, so that’s the main reason I got into it.

You read fashion magazines?
Even Vogue magazine because I like to watch girls dress up as well. I like Elle magazine. I love things online, like when all the big brands have a fashion show, I like to see the new collections.

Vogue is going to do a Dutch edition soon.
Oh, I didn’t know that.

Yeah, you should try to get your clothing line in it.
That would be nice.

What was your design process like for this line?
Well, I wanted the first [collection] to be clothes I stand for. And what I stand for is electronic music, so I wanted the design to look more electronic, like Tiësto’s electronic life. One shirt uses many of the colors that you can see in my shows. Everything from the light screen onstage to the colorful outfits that the fans are wearing. Another shirt, I took my symbol — the bird symbol — and I made it a more underground, futuristic kind of design. It’s all inspired by my life as a D.J.

So you’re starting with T-shirts, but where do you see this line going? Denim, fragrance, the works?
Well, it would be nice if it goes all the way. To shoes and pants, the whole nine yards would be amazing. But that’s going to be maybe in five or ten years from now — it’s a very small start. But it will be great to have a fashion career during and after my D.J. career.

Playin’ it safe, I see. So ten years in the future, when this line is huge, will you hold a fashion show?
I want a show for my clothing line, that’s definitely going to happen. I don’t know when or where yet, it’s definitely just a matter of time.

Would you be in it?
I’m not walking in it myself, no. I’m going to be one of those designers that walk in the end.

Will you do the music for it?
Yeah, for sure.

You pay attention to the runways. So, who are your favorite designers?
If I were a girl, I always like Chanel. It’s so stylish and timeless. So I like Karl Lagerfeld a lot. But for the rest, for myself to wear, I like Gucci a lot, and the smaller brands like Tiger of Sweden, Acne, even Diesel this year has a nice collection. The last couple years I didn’t like it so much but this year they have some cool stuff again. And even surprisingly, Adidas has some crazy stuff going on.

What do you think of the current state of nightclub fashion?
It totally depends where you’re going. If you go to a more underground club in Los Angeles you see a lot more dark clothes, almost gothic kind of style, combined with a lot of seventies. And then when you go to a big college rave, you see all the really bright colors, like pink and super-yellow — almost painful. And then you go to a regular, more high-end club, you see a lot of tiger prints and cheetah prints.

There’s a club in New York, Provocateur, that won’t let girls in who aren’t super tall and wearing five-inch torture heels. What do you think of that kind of dress code?
I think it’s kind of racist, almost, you know? I don’t think it’s a good policy. Of course, you have to dress nice. But to [insist] that people are a certain height? It’s pretty ridiculous. Not everybody is 5’9” or 5’10” so why wouldn’t you get in if you’re smaller but you’re still cool and you dress nice? It doesn’t make any sense to me. The best clubs in the world are always the clubs where you have a variety of people. Like you have the crazy people, you have the nicely dressed people, you have the office people, you have the regular guys — that makes it fun.

And at the bigger raves and festivals, a lot of young girls wear little more than underwear.
Is it Halloween?

No, dude, it’s your shows!
I think it’s just the rave culture, you know? Just their excuse to dress up like, uh, sluts. [Laughs (Ed. note: awkwardly).] Yeah, I’m not a big fan of girls in bikinis going out. At a boob bar, yeah I can understand it, but if you go to a club or you go to a nice restaurant, I think it’s better to dress up a little bit. I think it looks nicer. Why do you want to see everyone in bikinis? This is not a pool party. No, I like it when girls and guys just keep their clothes on. Look classy; leave something to the imagination.

Right, the raves are on dry land, ladies. Dry Land! Speaking of cliché rave trends: sunglasses at night, yay or nay?
I don’t think so, no.

How do you dress for your performances?
When I go out without D.J.-ing I dress up way more than when I’m D.J.-ing, because when I’m D.J.-ing, I’m working, so it’s like a three-hour sweat-fest for me. I’m in the spotlights, it’s warm, the equipment is warm. So I’m into wearing just T-shirts most of the time. If I wear nice jackets, I would die on stage. I get T-shirts from everywhere. From Kitson, from Atrium, from Bloomingdales.

How many T-shirts do you have?
I always give them away after I wear them twice. I basically don’t have a lot of T-shirts but I wear at least 150 T-shirts a year.

Do you watch Jersey Shore? Club life is a huge part of that program.
I heard about those people and I know D.J. Pauly D. I’ve never met him but I’ve heard about this guy. But I never saw the show, no. What I hear about it is not very good.

If you could have anyone model your T-shirts who would it be?
That’s a good question. For guys, maybe Tom Brady? Like a really good looking guy who works out. He’s a role model, he’s a nice guy. And for girls, I think, wow, there’s so many, huh? Maybe one of the Guess models or Megan Fox or something. It doesn’t have to be her, just somebody in that style. With dark hair and brown eyes. Not too blonde.