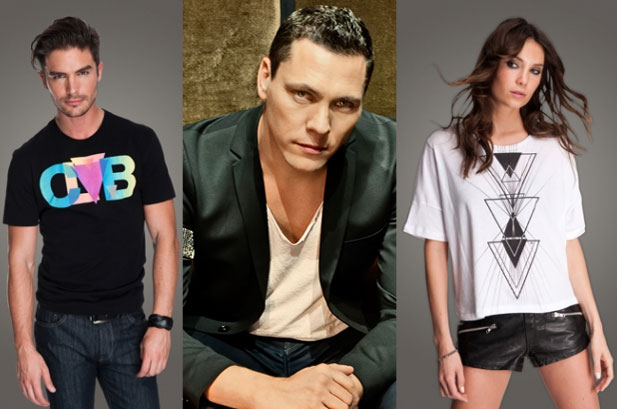 Tiesto, one of he world’s most famous DJs and dance-music producers, has brought his supreme mixing talents to the fashion industry with a new clothing line, CLVB LIFE. The electronic-music maven, who describes his own personal style as “contemporary, energetic, and sophisticated,” revealed that fashion has always been of great interest to him. “I have been working on this collection for a while now and I think it perfectly embodies the attitude of the CLVB LIFE experience worldwide,” he mused in a statement.

The collection threads together the electronic dance music movement and consists of high-end tees with electrifying graphic prints that cater to club culture. We caught up with the electronic dance mixologist to find out what makes his fashion pulse race, and he revealed he’s already working on new designs (as well as a new album) for 2012.

Billboard: What is it about electronic dance music that inspired you to create fashion?

Tiësto: Really just about every element, from the music to the clubs themselves and the people who are in them.

Club kids are known for having such a distinctive, colorful style. How much did the fashion sense of your fans influence the tees collection.
The way my audience dress is a major part of how they express themselves at my shows. The colorfulness is definitely a big part of this, particularly amongst the fans I played to on my recent College Invasion tour. There are a couple of shirts in the collection that are inspired by this, taking these colors and putting a stylish spin on them.

Do you plan on expanding the line beyond just t-shirts in the future?
Yes, without a doubt I’d love to do that. We’re working on a few ideas at the moment, so watch this space!

What’s next for you, both fashion and music-wise?
In terms of the fashion line, I’ll be starting work on new designs to launch at some point next year very soon. With my music, I’m currently working on my next artist album, which I’m hoping to release in 2012.

You’ve played for crowds all around the world. Which city blew you away the most in terms of its fashion.
That’s a very tough question, I don’t think there’s one that stands out above all others, I’ve been lucky enough to play in incredible cities like Paris, Rome, Miami, Montreal and Rio who’s crowds each have their great individual styles. I’ve taken inspiration from these places and so many more.

Who are your favorite fashion designers, and are there any in particular you looked to for direction?
Chanel and Lagerfeld are pretty special to me. In terms of what I wear at the moment, I’d say Gucci, Tiger of Sweden, Acne.

Whose style in the music biz are you admiring at the moment?
Kanye has a great fashion sense, I love seeing what he’s up to in this space.

Finally, what was the last song you downloaded?
The last thing I downloaded was the Bon Iver album. It was perfect to relax to during some recent time off.