Home » featured » Tiesto is the new partner for the Guess Capsule Collection – Interview from from Billboard.com 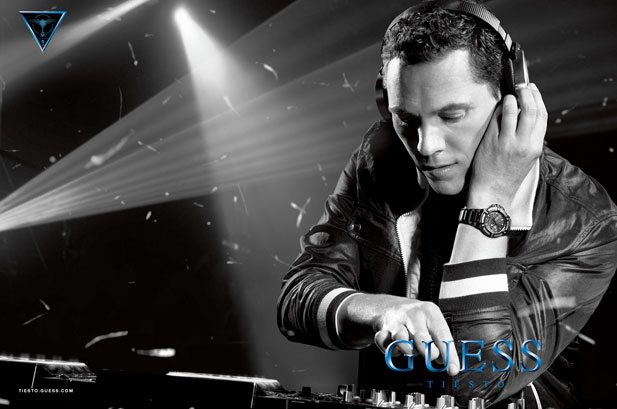 Tiësto will extend his reign as the world’s most sponsored dance music star via a new partnership with GUESS.

The internationally renowned DJ/producer will lend his style and name to a limited edition GUESS capsule collection, including men’s and women’s clothing and accessories. He’ll also tour under the GUESS sponsorship banner (on select dates) into 2013.

“I’ve had GUESS clothing in my wardrobe for years,” Tiësto told Billboard.com exclusively. “It’s a fantastic brand which is really relevant both for me and my audience. Their combination of creativity and ambition was really appealing to me.”

GUESS joins a wide array of brands from several different categories that work or have worked with the affable and influential Dutch superstar: From Intel and HP, to Axe body spray and Heineken beer, to GUESS competitor Armani Exchange. Just call him the Derek Jeter of music.

“GUESS is young, sexy and adventurous, and electronic dance music also shares these qualities. Tiësto was the natural choice to connect GUESS with our customers’ lifestyle,” said GUESS CEO and Creative Director Paul Marciano. “Once you meet Tiësto face to face, with his contagious smile and energy, you want only one thing: To have him share our future vision of the GUESS brand.”

The cobranded collection — which has its own Tiësto/GUESS logo, in black and electric blue — kicks off in August, with a new “multifunctional,” limited edition wristwatch, which Tijs says has a “slick, cool, exclusive look to it.” Plus, “there are discussions ongoing regarding additional accessory pieces,” says Tiësto’s Global Manager Michael Cohen, who brokered the deal.

The apparel will follow in October, a 22-piece line inspired by not only Tiësto (right down to the graphic prints on the T-shirts, said to resemble the lights and video projections at his shows), but electronic dance music (EDM) culture at large. In addition to T-shirts, it includes skinny-fit jeans in black and indigo treatments with zipper detailing, and leather and coated twill moto-jackets.

While the components of Tiësto’s long-time partnership with Armani Exchange were similar (he even launched a watch for them in 2009), and he has a club-inspired clothing line of his own (CLVB LIFE, launched in January), Cohen says that GUESS was unconcerned.

“Paul Marciano has been hugely supportive of Tiësto’s efforts to build his own CLVB LIFE clothing brand, and has offered his help and mentorship throughout the ongoing process,” he says. “There were no concerns about any previous relationships. Everyone is excited and focused on this partnership.”

“It has been really great working with such an experienced group of people in the fashion world,” added Tijs. “It has really contributed to my creative thinking for CLVB LIFE, as well as giving me a better understanding of the business side.” 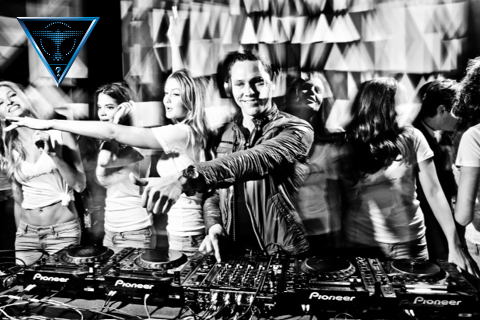 The partnership, which will run for one year, will also include a dedicated microsite, tiesto.guess.com, with product details and click-to-buy, performance schedules, and a global sweepstakes. It also leverages Tiësto’s massive social footprint (nearly 12.5 million Facebook likes and 1.2 million Twitter followers): The artist will announce the partnership Tuesday morning via his social channels, and use the hashtag #guesstiesto throughout the campaign. Tiësto will also create a new Club Life compilation in both digital and CD formats, available for sale exclusively in GUESS stores and online at guess.com.