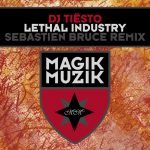 Sebastien Bruce started spinning when he was only 12 years old. By the time he reached his 20th birthday he had not only played all the essential clubs in Amsterdam but he was a ‘seen & approved’ deejay in the underground scene also. He won the 3rd price at the Dutch Deejay Championship in 2001 and soon gigs in the UK, Germany, France, Italy and Spain followed.

As a DJ he has played with the likes of Armin van Buuren and David Guetta. Throwing more oil on the fires they leave him behind, he has proved that he masters the art of climaxing. Sebastian Bruce translates his musical mania also into his own dance productions and now remixes one of Tiësto’s all time classics “Lethal Industry”.

Sebastien honors the original version, but redefines the arrangement, trademark melody line and break all over again. Firmly rooted within the trance dominion but with clubby beat programming and a slightly maximal house style use of synths, “Lethal Industry” just entered the modern dance floors and big rooms!