HP and Intel will be hosting the first-ever live stream of a concert on Twitter next week at the 2012 Consumer Electronics Show. The headliner: electronic music master Tiësto.

The concert will kick off the launch of a new 10-episode series on YouTube called “In the Booth” — a behind-the-scenes look at Tiësto’s life and his impact on the electronic dance movement. The private event at the nightclub XS at Encore in Las Vegas will stream live from HP and Intel’s newly enhanced Twitter brand pages.

Tiësto will play a 90-minute set on Wednesday, January 11 starting at 10:00 p.m. PT. It will then play on a loop on HP and Intel’s Twitter page for the following 48 hours.

“We have offered streaming on the site before, but this is the first-time ever that the site will feature a live concert,” Rob Pietsch, Twitter’s director of West Coast sales, told Mashable. “HP came to us with the idea and we couldn’t be more excited to hear how the company and Intel will be using their Twitter brand pages to reach out to the public and become destination sites. 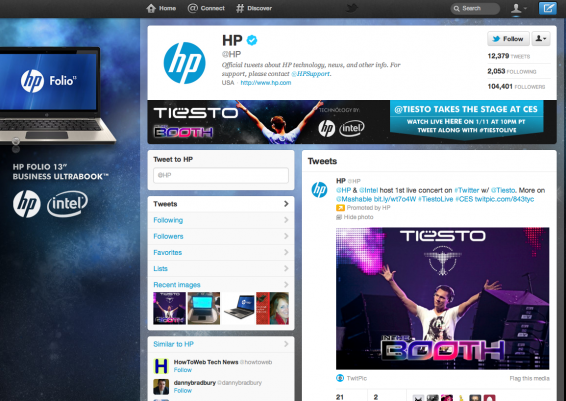 Twitter users will also be able to interact with others on the site while watching the live stream next week. HP and Intel execs will also be live tweeting from the show via the hash tag #TiestoLive.

The Web series – produced by Believe Entertainment Group – will launch Tuesday, Jan. 17 on YouTube and each video will be between five and seven minutes long.

“I’m always connecting with my fans directly through Twitter and other social media, so this was an exciting way to help launch the ‘In the Booth’ series and do something special for my fans,” Tiësto told Mashable. “One of the key reasons to collaborate with technology giants such as HP and Intel on my new show is the chance to try new things and go after big ideas..”