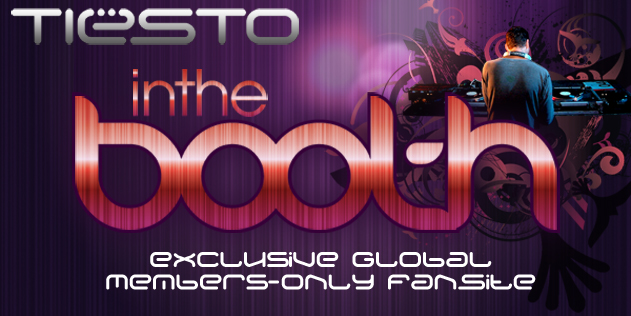 Tiesto announces new documentary series for ‘In The Booth’

Dutch musician, DJ and record producer Tiesto and Believe Entertainment Group today announced plans to launch an all-new, digital video series entitled “In The Booth,” a documentary-style show that will go behind the scenes with the world-famous DJ and give fans an up-close, personal look at the electronic/dance music superstar’s life and the global movement he has fueled. Believe Entertainment Group, a New...

Last week finally the recording of Tiesto live at Mysteryland 2010 was released. 2,5 Hours of Tiesto live, officially recorded by Tiesto self. You can see the stream at InTheBooth.com! Tracklist of the livestream: 01 Sander van Doorn – Intro (XX Booty Mix) 02 Florence & The Machine – You?ve Got The Love (Dimitri Vegas & Like Mike vs. Yves V Remix) 03 Gorillaz – On Melancholy Hill (AN21 & Max Vangeli...

Last week finally the recording of Tiesto live in Sportpaleis Antwerp was released. 4 Hours of Tiesto live, officially recorded by Tiesto self. You can see the stream at InTheBooth.com! Tracklist: 01. Tiësto Feat. Jonsi – Kaleidoscope 2 02. Tiësto & Diplo – Come On 03. Justice vs. Simian – We Are Your Friends (ID Remix) 04. Miike Snow – Silvia (Sebastian Ingrosso & Dirty South Remix) 05. The Prodigy – Smack My Bitch Up...

Tiesto’s new fan site InTheBooth 2.0 is now live and going. It’s a paysite but it gets you closer to Tiësto than ever before! Joining InTheBooth is the ONLY way to get access to pre-sale tickets for Tiësto’s global tour dates before anyone else. You will also receive exclusive updates, new music, videos, behind the scenes clips from Tiësto’s shows and members only merchandise. By becoming a member of InTheBooth, you will...